Alva was established in 1893 as a land office from the Cherokee Outlet Land Run, the largest of the land rushes that settled western and central Oklahoma. The site was chosen for its location on the Atchison, Topeka & Santa Fe Railway and likely named for a railroad attorney, Alva Adams, who had become governor of Colorado.

Alva is home to Northwestern Oklahoma State University, founded in 1897. The college’s main building for a time was the “Castle on the Hill,” a huge, fanciful brick building, modeled after a Norman castle, that towered over much of the town. The Castle burned down in 1935, to be replaced by Jesse Dunn Hall, which was dedicated in 1937 by Eleanor Roosevelt.

Today, the city council is actively soliciting murals -- one of the most recent is of the storied Castle. One can find marvelous murals throughout the downtown area, which is centered around a town square. Alva is a destination city for numerous northwest Oklahoma attractions, such as Little Sahara State Park, Great Salt Plains Lake and State Park, Alabaster Caverns State Park and the Twister Museum in Wakita. 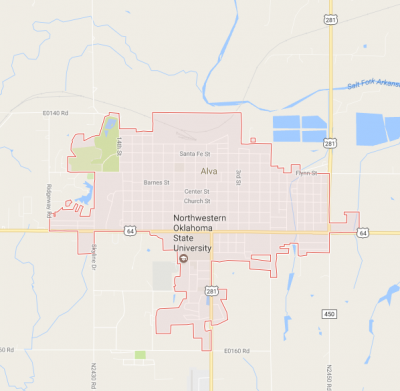 523 Barnes Ave
Alva, OK 73717
Please join us in encouraging artists, supporting the arts and humanities in Oklahoma, and making a commitment to freedom of expression and the nurturing of the human spirit.
Arts , Family Friendly OK-14
Alva, OK 73717
We can't wait for you to visit our petting farm and hay maze! Whether you are looking for a fun outing with the family, an educational field trip for your class, or a birthday party destination, Bradt's Menagerie is the perfect place. It's not just for…Learn More
Family Friendly, Nature, Outdoor Activity, Playground 709 Oklahoma Blvd.
Alva, OK 73717
Currently the museum has more than 6,000 accessioned items, including a mounted bird collection that is one of the largest in the state. This collection includes two whooping cranes, Grus americanus, and more than 20 mounted eagles.
Museum, Nature Downtown Alva
Alva, OK 73717
The Runnymede is located in Alva, Oklahoma, and functions as a community meeting place, a place to hold parties, weddings, banquets, club meetings, and many other functions. The Runnymede has a very colorful past. it was built in 1889 in…Learn More
Arts , Event (Venue), Historical Site, Mural, Museum, Photo Op, Statue