Arnett is a town in and the county seat of Ellis County, Oklahoma, United States; and has a population of 524.

The county seat of Ellis County, one of the state's westernmost counties, Arnett lies at the junction of State Highway 46 and U.S. Highways 60/283, approximately thirty miles due southwest of Woodward. The surrounding area, within the Cheyenne and Arapaho reservation, was allotted to individual tribe members and the remainder opened by the federal government to settlement by land run in April 1892. 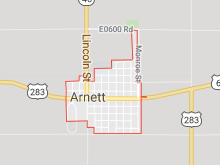