Boise City is a city in and the county seat of Cimarron County, Oklahoma. The population is approximately 1,266.

This small town is Oklahoma has an explosive claim to fame. The Bombing of Boise City, on July 5, 1943. was the only continental American town to be bombed during World War II.

At the other end of the world, the United States was involved in a bitter war against the Axis forces. The Axis forces wanted to control Europe and the Pacific, while the Allies fought for peace. Just after midnight, the air raid started and continued for thirty long minutes as the townspeople rushed for cover.  The first bomb thundered through the roof of a garage and exploded, digging a four-foot deep hole in the floor.  The B-17 made another pass and dropped a second bomb that struck the white framed Baptist church, exploding beside the building and breaking out several windows.  The crater was three feet deep. 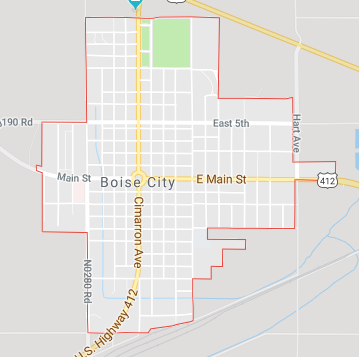