Cherokee is the county seat for Alfalfa County. The county was named after Governor Alfalfa Bill Murray.

In 1893, after the land opening as the Cherokee Outlet, developers wanted to attract railroads to transport the large wheat crops to markets. The Kansas and Oklahoma Construction Company, through its subsidiary the Cherokee Investment Company, bought 100 acres of land along its route, platted the town which it named Cherokee, and held a sale of lots on February 9, 1901. Cherokee officially incorporated in July 1901. Two years later a train line was constructed through Cherokee. To gain access to the railroad, residents of the nearby community of Erwin, which already had a post office by that name, relocated to Cherokee. Erwin then ceased to exist and Cherokee took its place.

By 1905, a second railroad was built through the community. The community was soon transformed into a dominant regional center for agricultural services, banking, wholesale-retail trade, and transportation, providing markets and services to the surrounding smaller communities, such as Ingersoll, Burlington, Driftwood, Byron, and Amorita. The town grew around its twin railroad depots.

Cherokee hosts the annual Bird and Crystal Festival each spring.

While in Cherokee, take time to experience the Salt Plains National Wildlife Refuge which was established in 1930 as a refuge and breeding ground for birds and for use as a sanctuary for migratory birds. The 32,197-acre refuge is part of the National Wildlife Refuge System, a national network of lands and waters managed for the benefit of wildlife and you. The Salt Plains National Wildlife Refuge is the only known site in the world where unique selenite crystals with hourglass inclusions are found. Because these crystals form in wet soil, sand and clay, particles are included within the crystal giving them their unique "hourglass" shape inside. Crystal digging is permitted from April 1 through October 15, sunrise to sunset. The digging area is closed from October 16th through March 31st, as the entire refuge is designated critical whooping crane habitat.

Cherokee offers an old fashion home town 4th of July celebration complete with food, games, train rides, swimming and more. If you are in Cherokee in August, put on your boots and hat for The Great Salt Plains Stampede Rodeo & Parade. Visitors will experience cutting, barrel racing, and of course bronc riding form exceptional cowboys and cowgirls at this event. Cherokee holds an October Stroll on the first Saturday in October and a Christmas Parade in December. 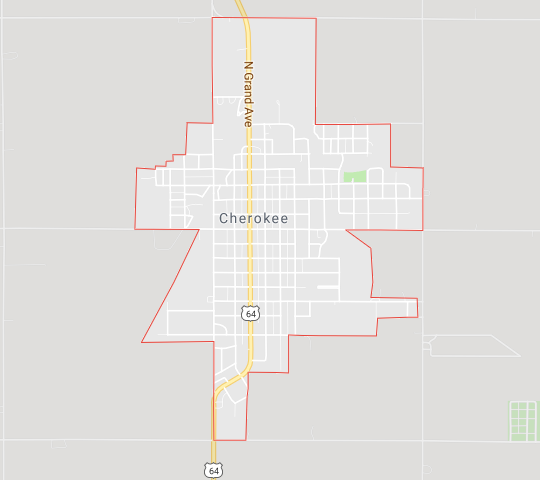