Wakita is a town in Grant County, approximately 8 miles (13 km) south of the Kansas state line. Founded with the opening of the Cherokee Outlet on September 16, 1893. Historian George Shirk asserted that the town name is a Cherokee word meaning water collected in a small depression, such as a buffalo wallow.

Visit Wakita for The Old Settlers Celebration in September.

Wakita is notable as a location in the 1996 feature film Twister. This small town was transformed into a movie set for the 1996 action movie blockbuster, Twister, starring Helen Hunt and Bill Paxton in which Wakita was destroyed by an F4 tornado that was part of a storm system later spawning an F5 tornado. False fronts were built onto the existing store fronts for some shots and then were removed and replaced with rubble in the streets after the tornado hit and the rest of the building was removed using CGI. Some buildings were demolished, but nothing was put in to replace them. The Twister (The Movie) Celebration is each year in May. 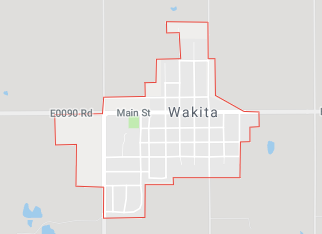 101 W Main St
Wakita, OK 73771
The Twister Museum displays a collection from the Twister Movie. The small town of Wakita was transformed into a movie set for the 1996 action movie blockbuster, Twister, starring Helen Hunt and Bill Paxton in which Wakita was destroyed by an…Learn More
Family Friendly, Movie Site, Museum, Photo Op