Watonga is perfect for a day trip or a weekend stay! Enjoy a stroll down Main Street to browse our antique shops, specialty gift stores, or quilt shop. Sample wine produced from locally grown grapes at Whirlwind Winery or discover the Watonga Lanes located downtown since 1959!

Watonga was the childhood home of Clarence Nash, the voice of Donald Duck. The name “Watonga” came from the Arapaho Chief, Wa-Ah-Dan-Ga-Ah, which means Black Coyote. The Blaine County Courthouse was built over a hundred years ago. The T.B. Ferguson Home and Museum, the former residence of the sixth Territorial Governor, is available for guided tours which include Watonga’s first jail, along with the U.S. Cavalry Relay Station. Just south of the museum is the Ferguson Presbyterian Chapel, built in 1901 and restored in recent years, it is available for weddings, receptions, funerals and meetings. The Noble House Bed and Breakfast is listed on the National Registry of Historical Buildings and is one of the lodging options in the area. While you are in town, stop in for a one the great concerts or shows at “The Liberty Theatre”.

Throughout the year, Watonga has many attractions that appeal to history buffs and outdoor enthusiasts. One of the state’s greatest treasures, Roman Nose State Park Lodge, just five miles north of Watonga, was originally constructed in 1956 and has been recently renovated to incorporate comfort, historical photographs and the natural landscape of the area. The lodge has 22 rooms, 11 cabins, group camp, a meeting room in the lodge and a restaurant. Roman Nose State Park is one of Oklahoma’s original state parks built by the Civilian Conservation Corps in the early 1930’s. An easy drive or walk through the park will transport the visitor to another time, when the area was the winter camp grounds of the Cheyenne and Arapaho tribes. The park offers many activities for families and outdoor enthusiasts: horse stables, hiking, mountain biking, horse trails, camping, swimming, fishing and a challenging 18-hole golf course with beautiful canyon views. Just outside Roman Nose State Park is Chaparral Retreat and Guesthouse, a contemporary, intimate B&B that is also available as an event venue, hosting wood-fired pizza dinners and live music.

Watonga and Roman Nose State Park host several seasonal events, including bi-annual Roman Nose Hills Trail Rides and the spring Trout Derby. Formerly the home of the Watonga Cheese Factory, Watonga hosts the Annual Cheese Festival the second weekend of October. The Watonga Cheese Festival offers a variety of activities for the entire family, including The Great Rat Race, a 10K and 5K, live entertainment, food vendors, and a variety of artisans. The cheese tasting line is always a favorite for anyone attending the festival. Whenever you are in town you can buy Watonga Cheese at many of our local stores. Come visit any time of year, for a day or a weekend, there is always something going on! 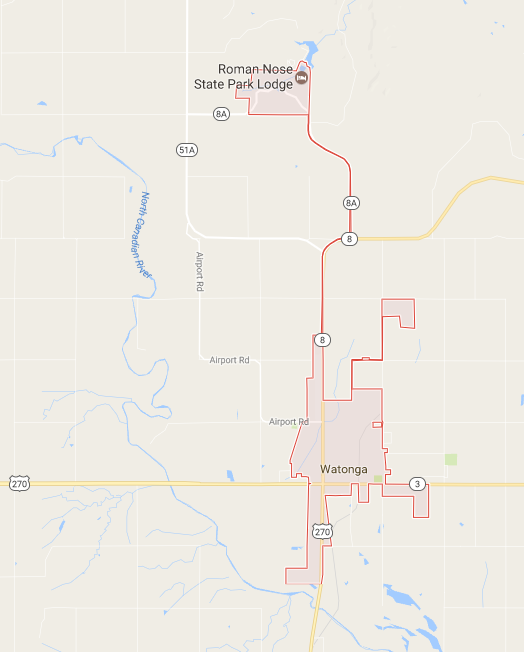 112 N Noble Ave
Watonga, OK 73772
The Noble House Bed & Breakfast is located in a charming 104-year-old building that’s been fully remodeled to make sure your stay is cozy and romantic!
Dining, Lodging 519 N. Weigle
Watonga, OK 73772
Thomas Benton Ferguson was born in 1857 near Des Moines, Iowa. Although he was trained as a teacher and Methodist minister, Ferguson began writing occasional articles for a local newspaper and developed an interest in journalism. After the 1892 land run,…Learn More
Antiques, Arts , Historical Site, Museum, Photo Op